Memorable Moments From The Season

The 2016 NFL season was an up and down one for the Pittsburgh Steelers and the team certainly battled their share of adversity throughout the campaign. From the season-long suspension of receiver Martavis Bryant, to playing chunks of the schedule without Le’Veon Bell and DeAngelo Williams, and losing key defender Cameron Heyward to a season-ending injury, the Steelers didn’t have an easy road to the AFC Championship Game.

On top of all of this, the team suffered through a four-game losing streak that left them at 4-5 halfway through the season, but then came the seven-game winning streak to close the regular season to finish at 11-5 and capture another AFC North crown. The win streak was pushed to nine games before the Steelers bowed out in New England.

Despite the setbacks along the way, a division champion with eleven wins and an appearance in the AFC Title Game certainly had its share of memorable moments. The usually stout Pittsburgh defense was young, starting several rookies and unproven players, but they responded well. Here is a video of some of their top plays from this past season, including rookie corner Artie Burns first career interception and rookie safety Sean Davis’ play in the end zone to keep the Chiefs from converting a two-point try in the Steelers two-point victory in the divisional round.

Not to be outdone, the offense had their fair share of memorable moments as well. They included a couple of crazy plays from the Steelers season-opening 38-16 win over the Washington Redskins. In particular, Williams crazy touchdown run in which he literally ran right between two defenders who tried to sandwich him and wide receiver Eli Rogers first touchdown reception, that seemed to bounce off a few bodies before he snatched it out of the air. From a statistical standpoint, the Steelers were led by their superstar tandem of Antonio Brown and Le’Veon Bell, who both finished in the top five in yards in their respective categories this season.

In addition to all of these plays, there were a few others that stuck out as well:

In the Wild Card round against the Dolphins, the Steelers were in the middle of a routine first quarter drive when Brown took a screen pass from Ben Roethlisberger and raced fifty yards down the sideline for a 7-0 lead in a game Pittsburgh went on to win 30-12. 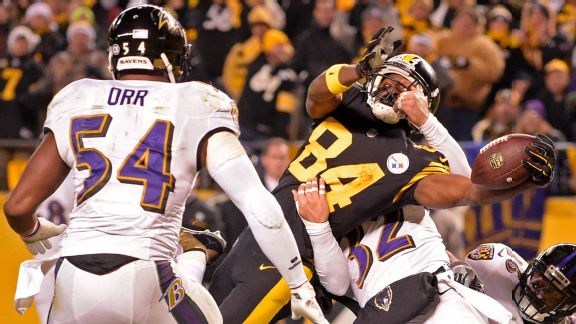 In the second to last game of the season, the Steelers hosted the Ravens with the AFC North on the line. After the Ravens had driven 75 yards in 14 plays to take a 27-24 lead with 1:18 to play, the Steelers quickly put their own 75-yard drive together, culminating in Roethlisberger’s four-yard strike to Brown with nine seconds to play. The game was also notable because it was the debut of the Steelers black on black uniforms.

Trailing the Dallas Cowboys 29-24 with 1:55 to play, the Steelers marched seventy-five yards in five plays, culminating in a 15-yard touchdown pass from Roethlisberger to Brown. The Steelers had lined up as if they were going to spike the ball and Big Ben faked it at the snap. Brown was the only player on both sides to move as he raced past the Dallas defender to catch the pass and score, putting Pittsburgh on top, 30-29 with forty-two seconds to play. They went on to lose, however, when Ezekiel Elliott scored from 32 yards out with nine seconds to play.

In the divisional round game against the Kansas City Chiefs, the Steelers led 18-16 and needed to keep the Chiefs from converting a two-point try after they had scored a touchdown with 2:47 to play. Chiefs’ quarterback Alex Smith dropped back to pass and fired a strike to Demetrius Harris and the game appeared tied, but not for long. On the play, linebacker James Harrison broke into the backfield and was dragged to the ground by a beaten Fisher. A holding penalty was called, the score was negated, the Chiefs were backed up ten yards and their second attempt failed. The Steelers held on to win and advance to the AFC Championship Game.