The Steelers claimed CB Anthony “Buddy” Jackson off waivers, after being released earlier today by the Kansas City Chiefs. Jackson, a UDFA out of Pitt last year, was originally signed by the Colts and spent time on the Redskin’s Practice Squad last fall. He was waived by the Giants and Eagles this Spring before being picked up by the Chiefs.  Jackson missed a couple days of practice last week with a hamstring injury. Long Snapper Luke Ingram was released to make space on the roster for his signing.

On a related note, the Broncos claimed CB Nigel Malone off waivers, who the Steelers released on Tuesday.

Steve, known by most as TTF, is owner of TheSteelersFans and administrator of the best Steelers message board on the net. Big fan of strong coffee and hardcore Steelers fan from womb to tomb.
@TheSteelersFans
Previous Steelers Training Camp Injury Report- 8/01
Next Cortez Allen To Miss Time After Knee Surgery 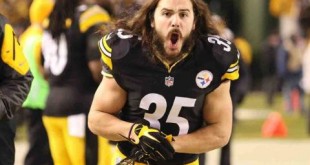